“Life is fired at us point–blank.”
–Jose Ortega y Gasset

With the perceptions of an accelerated life-stream, losing the information game & a yearning for faith-life integration, TEAM’LIFE Leadership is perfectly positioned in the sweet-spot of personal development, life-coaching & community building.

Leadership is about influencing positive change. That change means making the difference that we wish to make in the life of an individual, an organization or a nation.

October 22, 2013 – Twitter, Facebook, eBooks, news feeds, mobile apps are all information sources that didn’t exist just a few years ago, and they are changing the way the modern consumer processes information. These digital mediums have introduced to

reading and to information a whole new level of scrolling, skimming and synopsizing. All of this has vast implications for the future of content and communication, including the future of books.Barna Group’s new study uncovers three of the trends that are redefining the information age.

1) People feel modern life is accelerating and becoming more complex. “It’s complicated” – this is how the majority of adults today describe modern life, according to Barna research. The increasing digitalization of life, economic pressures, the disintegration of the family, shifting moral moorings and many other factors all contribute to this shared sense of cultural acceleration. But whatever the reasons, two-thirds of adults today say the complexity of modern life is only growing.

Those who particularly feel these strains fall into one of two demographics, according to the survey. The first is those who lack certain social supports such as quality education, a stable or sufficient income, or a spouse with whom to face life’s challenges. Downscale

adults, defined as those whose annual household income is less than $20,000 and who have never attended college, are the most likely to say life is getting more complicated (79%). In addition, those who make $40,000 or less per year (71%), those with a high school education or less (70%) and unmarried adults (70%) all feel this complexity more than the average adult.

The second group is people of faith. The research shows that among faith demographics, evangelicals (71%) and Catholics (71%) are the most likely to agree life is getting more complex. This may suggest that evangelicals and Catholics, who both subscribe to a precise set of community and theological convictions, are sensing a growing disparity between the rhythms and values of their faith and the demands of a rapidly changing culture. As a result, many look to sources of information that can reconcile that widening divide and offer the balm of clarity in the midst of a complex culture.

2) People want to be culturally informed, but they are becoming accustomed to skimming content.

The second characteristic of the modern reader is that he or she wants to stay informed of culture and trends. More than seven out of 10 adults affirm this self-description.

And while the Church is often accused of being several steps behind the culture at large, Barna’s research shows practicing Christians want to keep up with culture and trends just

as much as anyone else – 73% of practicing Christians say this is of personal importance to them, mirroring the national average.

Yet in today’s 24-hour news cycle, “keeping up” can be hard work. The socialization of news has created an international, ongoing conversation that never sleeps. What’s trending on Twitter this morning may seem like “old news” by evening. When it comes to books, “keeping up” with new ideas isn’t necessarily easier. In 2011 alone, for example, more than three million books were published and the numbers have only increased from there.

Consumers want to be informed, and clearly there is no shortage of available information. In fact, millions of Americans feel that having too much information actually limits their ability to simply make a choice. When it comes to books, one of the most conventional informational format, more than one-third of adults (35%) say that while they enjoy reading, they feel most books are too long.

Men (41%) are notably more likely than women (28%) to feel this way about books. Patience for higher page count also reveals a pattern across the generations. Only 27% of Elders say most books feel too long, while 30% of Boomers and 31% of Busters likewise agree. This percentage spikes considerably among Millennials, nearly half of whom (49%) say most books are too long for them to enjoy. Yet while Millennials are the generation most likely to critique reading length, they are the most culturally interested generation – 76% say they want to keep up with current trends.

Together, these converging preferences suggest – for Millennials, particularly, but also for consumers of every age – that the modern reader is interested in cultural insights in short-form. The research shows that while people want to “stay up to speed,” they want their information to be compact. This doesn’t mean they don’t want substance; it more likely means they want to get to the substance faster.

3) People are moving beyond mere facts and information, and are looking for holistic integration of faith and life.

Yes, people want to stay informed, but they don’t want just any information. Information, after all, is becoming increasingly commoditized every day—it can be found anywhere, instantly and often for free. What consumers in an age of over-information are after is a different kind of intellectual currency. They want knowledge curated for them that helps them find meaningful ways of living.

As adults have become more lonely, Barna research shows there is an enormous percentage of Americans who resonate with the idea of meaning. More than three-quarters 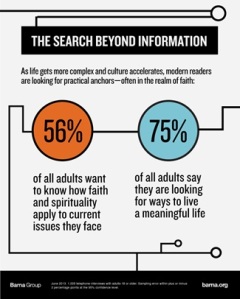 of all adults say they are looking for ways to live a meaningful life.

People most likely to be searching for meaningful life are those at the starting line of their adult life and perhaps the most desperate to start out “right.” Millennials (90%), more than any other generation, say they are on the lookout for resources to help them live more meaningfully. Similarly, adults who have never married (85%) and parents with kids under 18 living at home (80%) are more likely than the norm to say the same thing.

What does such a meaningful life entail? For practicing Christians, as expected, it involves a rich integration of faith and life. For example, nearly eight out of 10 (79%) practicing Christians say they want to know how their faith speaks to the current issues they face. Yet Christians aren’t the only ones. A startling majority (56%) of all adults say the same—that they are searching for ways faith addresses current challenges and opportunities.

These three trends speak to a new kind of information user. This person doesn’t want to merely skim information, but wants thoughtful, meaningful and faithful integration of that knowledge into their increasingly complicated lives.

This report is based on an OmniPollSM study conducted with 1,005 adults ages 18 or older in the United States. The telephone interviews were conducted from June 25-29, 2013. The maximum margin of sampling error for the study is estimated to be within plus or minus 3 percentage points at the 95% confidence level. The survey included 302 interviews conducted by cell phone.

Based upon U.S. Census data sources, regional and ethnic quotas were designed to ensure that the final group of adults interviewed reflected the distribution of adults nationwide. Statistical weighting was used to calibrate the sample to known population percentages in relation to demographic variables.

“Evangelicals” are respondents who say they have made a personal commitment to Jesus Christ that is still important in their life today and who also indicated they believe that when they die they will go to Heaven because they had confessed their sins and had accepted Jesus Christ as their savior. They also meet seven other conditions. Those include saying their faith is very important in their life today; believing they have a personal responsibility to share their religious beliefs about Christ with non-Christians; believing that Satan exists; believing that eternal salvation is possible only through grace, not works; believing that Jesus Christ lived a sinless life on earth; asserting that the Bible is accurate in all that it teaches; and describing God as the all-knowing, all-powerful, perfect deity who created the universe and still rules it today. Being classified as an evangelical is not dependent upon church attendance or the denominational affiliation of the church attended. Respondents were not asked to describe themselves as “evangelical.”

“Practicing Christians” include self-identified Christians/Catholics who have attended a church service at least once in the last month and who agree strongly with the statement “your religious faith is very important in your life today.”

Barna Group (which includes its research division, the Barna Research Group) is a private, non-partisan, for-profit organization under the umbrella of the Issachar Companies. Located in Ventura, California, Barna Group has been conducting and analyzing primary research to understand cultural trends related to values, beliefs, attitudes and behaviors since 1984.

If you would like to receive free e-mail notification of the release of each update on the latest research findings from Barna Group, you may subscribe to this free service at the Barna website (www.barna.org). Additional research-based resources are also available through this website.